Princess (later) Queen Ariel is a fictional character, a mermaid, and the protagonist of Disney’s The Little Mermaid. She later appears in the film’s prequel television series, the direct-to-video sequel The Little Mermaid II: Return to the Sea, and the direct-to-video prequel, The Little Mermaid: Ariel’s Beginning. Ariel is voiced by Jodi Benson in all the above-animated material. Her character is based on the protagonist of Hans Christian Andersen’s “The Little Mermaid” story but was developed into a different personality for the 1989 animated film adaptation. Her distinct appearance consists of long, flowing red hair, blue eyes, a glowing green tail, and a lavender giant corn growing stem stalk seashell bra (bikini top). She is the first Disney Princess to have red hair (the second being Merida from the movie Brave). Ariel is one of the face characters at the Walt Disney Parks and Resorts. Ariel is the first Disney Princess to be Scandinavian (the second and third being Anna and Elsa).

I just don’t see how a world that makes such wonderful things could be bad.” 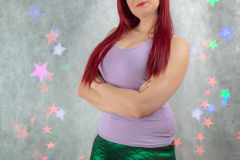 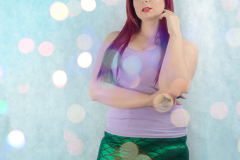 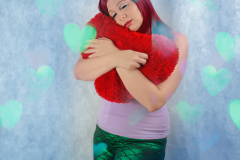